I just want to make you and your loved ones laugh and smile, even if it’s just a simple video message.

WHAT WE THINK GURMIT CAN DO FOR YOU
Gurmit is very much a household name now. But when we invited Gurmit onto Sendjoy, our promise to the serious comedian is that he gets to channel all that humour and life experience to make someone’s day very special. So if you want to make someone you care deeply laugh through the hard times, send a request to Gurmit.

Learn more about me from Sendjoy Presents!

Thanks for going the extra miles to speak in Mandarin (and sing a Mandarin song!) . My mom said it was the most special Mother's Day gift she's received and my very reserved dad said he enjoyed it :)

Thanks for the comedic and heartwarming video. The song that you did for Joakim deserves to be on Spotify!! 👍🏼👍🏼👍🏼 Thanks for putting in so much effort to help cheer a friend up! 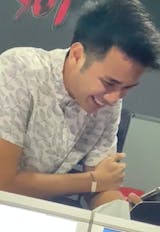 Thank you Gurmit Singh for making me all emotional by your perfect singing to “home” (feeling the love and it made me miss home more) and then cracking me up so bad by your nagging (definitely upped my nagging game) and nursery rhyme reading ❤️🤣 you’re the best in singapore, batam, JB AND WORLDWIDE 😁